﻿﻿
The Moroccan Rasta Said wants us to stay and bang out another tune on his box shaped guitar. The goat stomach strings are stretched taut by the sun and begging to be plucked, but it’s time for us to leave. So with heads still cloudy from home-made date-schnapps (shudder) we shoulder our packs and puff back up the dry, red valley leaning towards the promise of Cascadas Douzoud's sweet breathe, a thundering waterfall where local kids plummet head long off slippery rocks while tourists strike adventurous poses in the foreground. ﻿﻿﻿﻿
﻿﻿﻿﻿It is time for us to part ways, Lenny, Sam and I. It has been just two weeks that we have shared in this country but Morocco has provided us with such a plethora of experiences it feels like at least a month since we left Spain.
The night before we boarded the ferry the three of us slept on the beach at Tarifa. It was such a pleasant night we merely spread our tent and sleeping bags on the sand and lay on top. As we reclined, sipping on some beers, we noticed lights on the horizon. Fishing boats we concluded, until we realised that these lights weren't shifting, that was land we were seeing - that was Africa.
Of course there is a considerable North African influence left from the 800-or-so years when Spain and Portugal were controlled and ruled by the Moors. This history is evident in the architecture, the food and, at times, the language, but when we dis-embarked from the ferry in Tangier we stepped out into another world completely. It was evident straight-away that travelling here would be different to Europe, there was a looser grip on the rules; important details like prices and distances became hazy making everything negotiable. 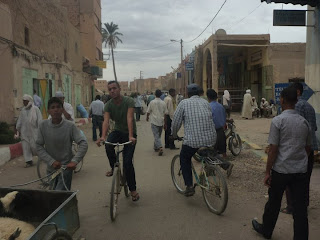 During our trip around Morocco the three of us banded together against the hustling bus conductors, the quick witted street cons and the taxi drivers with dollar signs flashing in their grins. A lot of the time it seemed that the only people we could trust were each other. Most people in Morocco are honest, of course, but the ones which gravitate towards three lanky white-boys with backpacks should be accompanied by a cello player sawing out the theme song of Jaws. These Moroccans transcend in the art of lightening foreigners' wallets. One routine which we encountered more than a few times, but only fell for once or twice, plays out as follows:

A seemingly spontaneous conversation is struck up on the street, usually opening with an enquiry into where you come from. To our reply of New Zealand, we get in return "Ahhh, kiwi, kiwi! Kia ora! All Blacks, sheep etc..." I believe they have a similar repertoire for most tourists. This is the bait on the hook. Impressed by his knowledge of your country (this works especially well for New Zealanders) you let your guard down and start a conversation; maybe he can tell you where you might find a good place to grab some lunch. "Yes, yes of course," he replies "but first you must allow me to offer you a mint tea."
This inconspicuous offer of a small glass of hot water mixed with a lot of sugar and a little mint is the the hook on the line. Of course any refusal will be taken as a great insult. You see, he explains, he is different to all the other people who only want your money - indicating at this point the less well spoken and dressed people on the street who have also been pestering you - he is interested in your culture and just wants to welcome you to his country, then later, he promises, he will take you to the perfect restaurant so you can have some food.
This cunning ploy works on the visitors wish to show respect to local customs. How could you refuse such hospitality? Nobody wants to be the culturally in-sensitive tourist and what's the harm in a cup of tea anyway? You are then lead down a dis-orientating series of alley-ways, he distracts you and charms you further with more small talk about Morocco, where you have been and the wonderful places you should go, until finally, just before you realise you have no idea where you are, he leads you into his Uncles blanket store. Stools are produced, tea is served and the sales-pitch begins. This is the fight between angler and fish.
Your  joy at finally meeting a local who doesn't want your money withers and dies as young men appear and begin to laboriously unroll blanket after blanket at your feet. Despite your protests your friend asks you which ones you like.
"I didn't come here to buy anything." you exclaim, exasperated.
"Then why did you come?" he asks, incredulous.
As more and more blankets are displayed you listen to the the sad story of this small family run business' struggle to put food on the table, the cup of hot tea scalding your palm. If this prodding at your conscience doesn't produce results they may switch to intimidation. The uncle will emerge and the men will begin to speak angrily to each other in Arabic all the while stabbing dirty looks your way. This reminds you that you are a long way from home and without their help, maybe even their permission, you may not be able to find your way back to your hostel.
If their scheming works and you agree to buy something, the next challenge will be deciding what to buy and negotiating a price. These guys are experts in this game. There will be a variety of quality - the cheap stuff which, they insist, only a fool would buy, the medium stuff which is OK but what you really want, my friend, is the top gear 100% camel wool blanket, Africa's finest hand woven work sourced from a remote Berber village which has been producing these blankets for centuries, I will make you a good price. In poorly-lit shops in the back streets of a strange city or town, confronted with the crocodile smile of a Moroccan blanket salesman, you are already well and truly on the back foot. How much is a hand woven camel wool blanket worth anyway? How do I know this is genuine camel wool? Come to think of it how do you get wool from a camel in the first place? If you can't answer any of these questions then the next step of deciding on a price will be like shooting fish in a barrel. Remembering, of course, that you are the fish.

Any independent travel around Morocco will inevitably lead to situations such as this one. This is not necessarily a bad thing. It awoke me to the need to stand firm and be pro-active in business transactions. In every culture, for example when buying a used car in New Zealand,  some skills in haggling may come in handy and although things may be conducted in a completely different manner, in Morocco at least you get a lot of practise. I also learnt the invaluable lesson that if you wish to buy something, first research the price.

Adding even more volts to the culture shock was the fact that we were visiting Morocco during Ramadan, the holy month when Muslims fast, not allowing themselves to smoke, eat or even drink from the time they wake up until sunset. For a whole month. This can lead to tense times, not to mention pangs of guilt when you realise the people preparing, serving and/or smelling your dinner haven't eaten all day.

But backpacking through Morocco is not just a school of hard-knocks. The rewards for us were rich and plenty. One unforgettable experience came half way through a four day camel trek in Erg Chebbi close to Merzouga in the south east of the country. An erg is a huge sea of sand dunes with little or no vegetation cover. On our third day in this blinding, sand swept landscape we were welcomed by a wide-smiling Tuareg farmer to his oasis-fed vegetable garden blooming like green magic out of a sun baked eternity. He filled a tank with cold water, enough for us to dunk ourselves one by one, fully clothed to enjoy a cool weightless moment in the eerie blue silence.


That day as usual we found a shady spot to play cards while Mohammed prepared lunch. Before long we heard the whispers and stifled giggles of children, it was the farmers kids; two boys and a wee girl, come to check us out.
Sam produced his Frisbee, as it turns out a fantastic thing to take to an erg, and tossed it their way. To squeals of delight, mainly from the kids, we threw that thing around for what seemed like hours. Looking at our surroundings outside the garden we could have been on Mars, but to these kids that was just their humongous sand pit. The three of us with our sunscreen, blue eyes and strange flying disc were the extra terrestrials. It was the surreal, almost otherworldly moments like this which really marked our trip through Morocco. 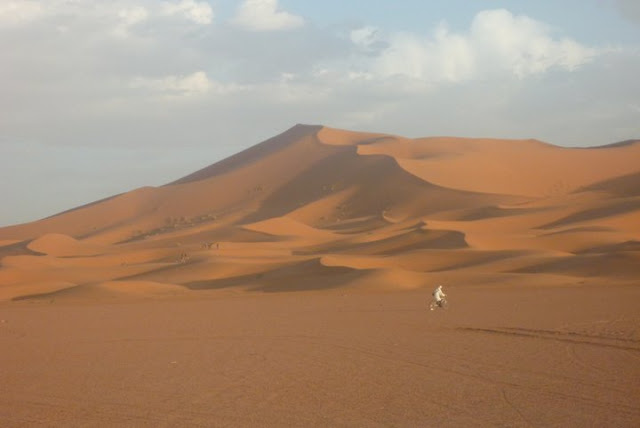 So I say good-bye to Lenny and Sam, together we have swayed and rocked on camels backs watching as giant Saharan sand dunes swallowed the sun whole, we have peered through rounded doorways into houses painted deep blue like igloos sculpted from the sky a call to prayer echoing through the winding streets around us, we have passed under the great Blue Gate of Fes and lost ourselves in the smelly, dirty, chaotic maze of that ancient city. We have taken what Mama Afrika dished us and come out the other side smiling. I wish them well on their trip through Europe. I am continuing to Marrakesh and then proving once again that I enjoy self torture by climbing Jebel Toubkal (4167m), the highest mountain in North Africa. I'm not sure what I will find when I get up there but I do know thing Mama Afrika hasn't finished with me yet. 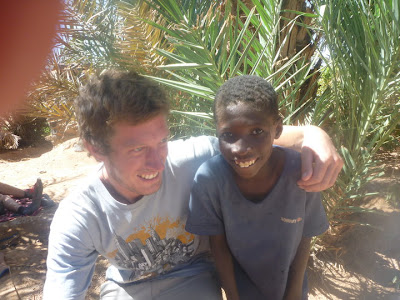