From the mountains, fiords and glaciers of Patagonia, my next trail building contract took me to the barren desert of Northern Mexico. In this totally unfamiliar environment I realised how much I took for granted back in New Zealand, and it dawned on me that maybe Fred Dagg was right when he sang "we don't know how lucky we are, mate."

"How much further to the top?"
It's Dan, I can tell by his voice that he's only a few metres behind me but a wall of thorny branches blocks him from view. "Well, surely we must be at least half way up by now." My reply sounds less reassuring than I intended. 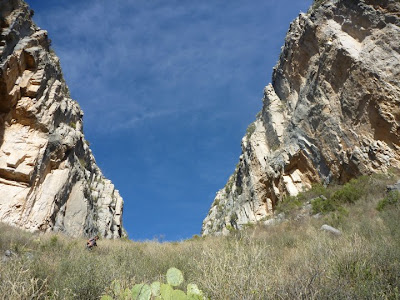 We are in the middle of a steep, tight canyon choked with thorny bushes, in the desert of Northern Mexico. We encounter these ferocious trees every day while cutting trail and have dubbed them "piranha bushes". Usually there's space to manoeuvre around them but here they bristle all around us, their thorns grinning.
What an alien place this is, so different from anything I’ve experienced before – in terms of the environment, Patagonia and Tierra del Fuego aren’t massively different from parts of New Zealand, but here, this is like another  world. And the differences don’t stop with the environment.

Two months ago, in a bike shop in San Antonio, Texas, when I told the attendants that I was going to cross the border to build trails in the North of Mexico they couldn’t believe it. “Are you crazy man?! It’s super dangerous down there.” I dismissed the comment as a typical American over reaction - close minded Texans who have been exposed to too much Fox News fear mongering. I took my new bike and wheeled it out the door, leaving them shaking their heads behind me. Turns out I was the ignorant one.
Because the truth is, a war rages in North Mexico. A war fought between drug cartels that battle for control of supply routes into the US. In the past five years almost 40,000 people have been killed. The police here are the most corrupt in the world (while New Zealand’s, apparently, are the least), the politicians, if they’re not in the cartels pockets, are too scared to make a stand, those who do are often gruesomely executed, as are the journalists who are brave or foolish enough to tell the truth. The criminals are the ones in power here, and they rule with terror and ruthlessness, attacking super markets, churches and even pre-schools to instil fear and maintain control. Can you imagine living in a place like this? 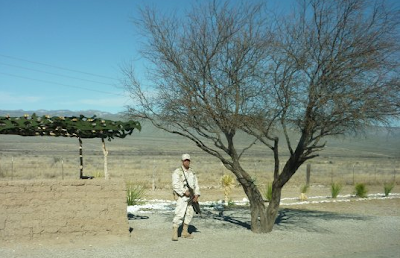 Working at Rancho San Enrique - a cluster of unassuming buildings adrift in a sea of sand and cacti - 5 hours drive from the closest town, we are able to carry on blissfully ignorant of the war which crackles and burns around us. Our main concerns out here are the bike trails we are building, what the weather is doing and how many beers are in the fridge. The only obvious sign that things aren’t completely stable in these parts is the military check point we pass through to get here and the giant machine gun mounted Humvee which occasionally rumbles down the road, packed with young soldiers armed to the teeth. 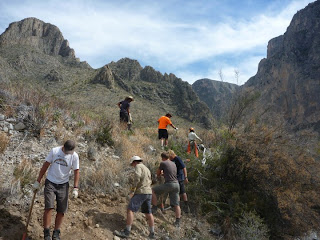 For the past two weeks we have been cutting a track in the shadow of Taco Canyon, a huge rift cutting deep into the sun-baked mountains which define the Northern border of Rancho San Enrique. Often, while leaning on my rake (discussing work of course), my eyes drift up to the head of the sheer sided valley and I notice a big crack in the cliffs. It looks like a good way to get up to the tops, from where there must be some amazing views out over the desert.  Dan, Kieran and I decide to give it a shot one afternoon. Our plan is to walk up the canyon to the bottom of the crack and then see if we can use it to access the top. We jump in the Kubota, a small 4wd buggy, and drive it down the long sandy road. Cacti whip the windscreen as we go.

Apart from the obvious military presence, there are other, more subtle signs that life here in North Mexico is far from easy. One day I was talking to Louis, one of the local labourers who I became friends with, we were outside the house watching  the sky blaze with another stunning sunset, chatting about nothing in particular, when I asked him whether he had ever seen any gang violence in his home town. I can still remember how his eyes glazed over, as if hardened with some memory of his past. He suddenly became evasive and made an excuse to leave. As he walked away I had to wonder at what those eyes had witnessed.
It was then I realised how different we were, Louis and I. No matter how much we got to know each other, there was always going to be this invisible barrier between us. Our histories were just too different.  I had grown up in one of the most peaceful countries in the world, somewhere where you can trust the police, where the violence on the TV news takes place in another world, far away over miles of ocean. For him it was right outside his front door.
The going doesn't look easy. It´s a steep and narrow ravine, tangled with thorn trees and boulders. From here we can see to the top and it looks a long way off. Wouldn't it be nice to go back to the ranch, get out of the sun, put our feet up and crack a cold beer? Certainly, but we can't go back and tell the 12 other boys that we didn’t give it a shot can we? No way Jose. 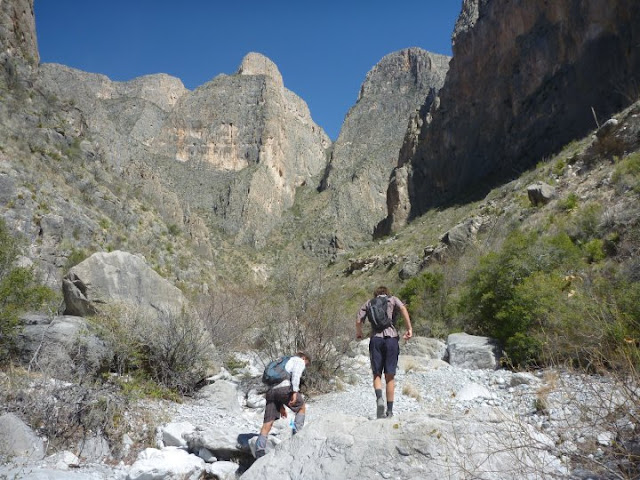 We slowly work our way up and once amongst the boulders it's a matter of guessing which thorny alley-way will take us the furthest. The walls creep closer and closer on both sides as we climb higher, until the sky is just a narrow ribbon above our heads. We look in envy through the sweat in our eyes at the clear and open blue space. A jet black raven passes in front of the sun, his shadow sweeping over us.
"How much further to the top?"
I have no idea.

The more I think about the situation with Louis and I, the guiltier I feel. What did I ever do to be blessed with this life - getting paid to travel around the world building mountain bike trails? Do I really deserve it?  Here I am, a tumble-weed gringo blow in, earning ten times as much money as him and riding around on a bicycle that he could never afford, while he toils and sweats under the harsh desert sun for peanuts, hundreds of kilometres from his wife and kids. For me this is just a short stint, a small taste of life in the desert, something to brag about to my mates when I get back home. This is his reality.
As we push through the bushes, the thorns tear at our skin, snatch at our hair and clothes. I never expected things to be this hard. For a long time it seems we are making no head way at all. We are getting tired and running low on water. But then the piranha bushes begin slowly to thin out, the river of sky over our heads widens and suddenly we emerge, scratched, sweating and dirty, onto the mountain tops.
I remember one evening when I was having another chat with Louis. The sun was low on the horizon, dousing the craggy and barren mountain range behind us in electric golden sunlight. I was telling him about a hike I did in Tierra del Fuego, trying to explain the strange landscape of frozen lakes and glacier covered peaks. Shaking his head in wonder, he asked me questions about the cold, the ice, the wildlife. Then he asked me if I was going to continue travelling after my stint here. I was kind of reluctant to tell him, I didn’t want him to resent me for having these opportunities he would never have. In the end I told him my plans to travel south through Mexico and into Central America, then fly to Europe to work and travel over there. His eyes lit up, I could see how excited he was for me. He was saying how cool that was going to be, and how he would love to go to Europe. There was no resentment or jealousy, just admiration and excitement. 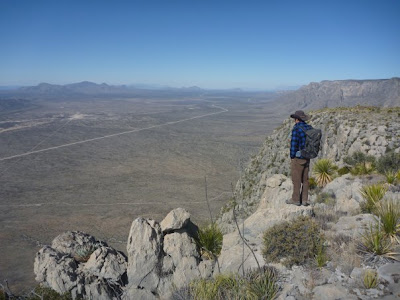 From up here we can literally see for miles. An ocean of desert laid at our feet, dissected by dead straight roads heading determinedly into oblivion. In the distance we can see spiralling chimneys of dust tracing their toes in the sand, heads swaying like cobras. Great pale faces of rock rise sheer out of the earth like icebergs. Dan, Kieran and I stand in silence, surveying the foreign land we find ourselves in. Three kiwi lads surrounded by a harsh wilderness of scorpions, coyotes and rattle snakes, marooned on an island of peace in the midst of a war we will never fully understand.
Louis' unexpected reaction made me think. In life everybody is dealt a different hand, and it’s seldom a fair deal, but what really matters is how you play your cards. I have been blessed with a good life, and I can’t let shame or guilt stop me from playing my cards the way I want to. Seeing the way people live over here has opened my eyes to a grim reality – it’s a cruel world – but it has also made me realise something else, that to not make the most of each and every opportunity is not only an injustice to you, but an injustice to all the people who will never get that opportunity themselves. If Louis knew I had passed up on seeing the world because I felt guilty for receiving the opportunity, he would think I was an idiot.
When I return home, I will definitely appreciate our green and tranquil little country that much more. But for now I think I will wander a bit further, open my eyes a little wider and see what more I can learn from this crazy, cruel but wonderful world. After all, I’ve barely begun to scratch the surface.