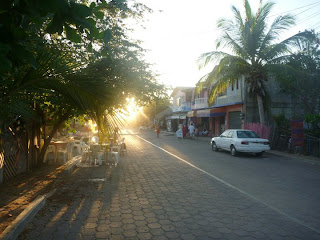 When I arrived in Zipolite, I made the rookie mistake of wandering down the street with my backpack, looking as if I didn’t know where I was going (which I didn’t). I hadn’t learnt this lesson yet, but the trick is to walk with purpose, at least pretend you know where you are headed - that way you’re less likely to attract any unwanted attention. As I wandered down the paved road running parallel to the beach, the atmosphere was very relaxed. Locals sat outside their stores chatting, bare foot kids kicked a soccer ball around, dogs stretched out in the shade of palm trees.
A guy noticed me walking aimlessly down the street, sweating in the incredible heat. He approached and smiled, introducing himself as Eduardo; he was about 40 years old with a goatee, sunglasses and a baseball hat. He welcomed me to his village and then offered to help me find a place to sleep. Well, that’s nice I thought, what a lovely, friendly little town this is. He took me to a hostel on the main road, a dirty, smelly place with unfriendly patrons – but according to Eduardo “the cheapest in Zipolite”, plus he said he could get me a discount. It wasn’t exactly the type of place I had expected to find, and even with the supposed “discount” was not all that cheap. I asked if there was anywhere I could camp, maybe on the beach? Both hostel owner and Eduardo shook their heads. After some urging from Eduardo that this was the best I would find, I reluctantly agreed to stay. The sun was so hot, and my head heavy from too many tequilas the night before, (my new found friends at Puerto Escondido weren’t about to let me get away quietly, making my plans for an early night out of the question) I just wanted to lie down for a while. Eduardo then took me aside and explained that he was out of work, struggling to find a job and asked if I could please give him some money, ahhhh of course, now I see. I gave him a few pesos and said good bye. I went into my ply-wood walled room and dumped my heavy pack on the dirt floor. It was like an oven. I flicked on the fan which cranked up like a Boeing 747 but for all the noise produced a pathetic amount of wind, and lay down on the slouching, uncomfortable bed. After about an hour of restless sleep I grabbed my towel and headed to the beach. Eduardo was waiting for me on the street, an empty beer bottle and some cigarette butts beside him - I see my money went  to good use.
“Where are you going?” he asked
“To the beach.” I replied.
“I will come with you.” Well, ok, it’s a free country I suppose. “But first, would you like something to drink? Maybe a beer, I know where to get ice cold beer - the cheapest in Zipolite.”
Actually a cold beer would be nice, it was still terribly hot. So we went to a small store across the road, I bought two beers and we pulled up a couple of plastic stools and sipped them outside on the street in the shade. Eduardo would not stop talking, telling me about this secret beach he knew about, and all the reasons I was lucky to have met him. I finished my beer quickly and started to say good bye, hoping I could leave him behind. I was beginning to tire of his company. I didn’t get a genuine feeling from him, I was starting to see that this relationship was based on me giving him money, and I felt stupid for falling for his “helpful local” routine.
“Wait, I will take you to this secret beach, come on, it is beautiful.” Yea, yea the most beautiful in Zipolite I’m sure, “You won’t find it by yourself.” One thing I have to give him credit for - he was persuasive.
“Ok, let’s go.” I reluctantly agreed. We walked to the beach, along a clear well-travelled path, and when we arrived, there were probably 10 people there, all males, all nude. Riiiight.

“What do you think? Beautiful, no?”

“Um yea, nice uh, rocks… well I’m kind of hungry I think I will go get some lunch.” As soon as I said these words, I regretted them.

“Ok, what would you like to eat? I know a great restaurant, blah, blah, blah…” I was not in the mood for this guy, but he hadn’t really given me a reason to tell him to get lost. It was incredibly hot, I was dehydrated, tired and hungry - maybe I was being unfair to him. He was unemployed, lonely and bored; it could be he was just trying to be helpful. Alright, I’ll give him another chance. We ended up back at the hostel, sitting at a plastic table out the front, dogs sniffing at our feet, eating chicken and rice and drinking another beer. So this is the “great restaurant” he was talking about? He finished his beer, ordered another, then asked if I could please pay for his lunch and drinks. Ok, that’s it. What had this guy actually done for me so far? Taken me to this “fantastic” hostel, “top secret” beach and now this “great” restaurant, all of which I could have quite easily found by myself. I could see he just saw me as a cash machine, now how do I get rid of him? That’s when Raul showed up. Overhearing my accent he asked me,


“Mate, are you a Kiwi?”
“Yea bro, where you from?”
“Stralya.”
He joined our table and we drank a beer together, talking and laughing. Eduardo was clearly becoming frustrated at not being able to understand what we were saying, he kept trying to interrupt. Raul looked at me through his one good eye as if to say “Who is this dickhead?” I just shook my head.
“Where ya staying?” he asked me,
“Right here, out the back”
“Oh yea, is it nice?”
“Far from it, man.”
“How much?”
“Hundy.” ($10 NZ)
“Mate, I’m crashing on a hammock at this other place right on the beach for 40, or you can chuck your tent up for the same price.”
I looked sideways at Eduardo; we were talking too fast for him to comprehend “Old mate here told me there was nowhere to camp.”
“Well screw this guy, grab your stuff, I’ll show you where it is.”
That was just the motivation I needed. Eduardo was not happy, neither was the hostel owner, but they had lied to me so I didn’t feel guilty about leaving. I grabbed my stuff, paid for the food and beers and got out of there. I thanked Eduardo for his “help” but didn’t tell him where we were going.  He seemed a little offended, but no doubt he would soon find another tourist to leech off. 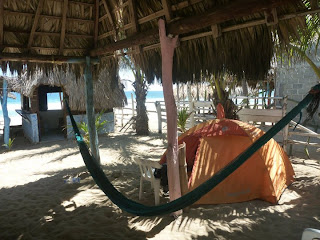 Arriving at the other place, I thought “Now, this is more like it.” There were other travellers, hammocks, music, a bar, a place for my tent and a nice, relaxed atmosphere. All of this directly on the beach and open to the breeze. 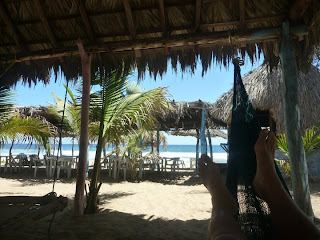 This was where I spent the next three days, waking up early when the heat in my tent became unbearable and moving to a hammock, reading a book or watching the waves, chatting with other travellers or listening to my iPod. Local ladies walking down the beach balancing buckets on their heads would pass by, selling anything from tamales and tacos to fresh fruit and cold beers.
I would occasionally take a stroll down to the more popular end of the beach, where the water had less of an undercurrent, for a swim. The good thing about Zipolite is there are no big resorts, night clubs or high end tourism. It is a pretty liberal place with a laid back hippy atmosphere, a place where reggae music and ganja smoke float on the ocean breeze, palm trees sway and stress melts away. It was a good life, but I soon became restless. Other travellers’ stories of the jungle in Chiapas made me hungry for something more adventurous. I wanted to see monkeys and parrots, I wanted to swing from the vines like Tarzan. I also wanted to get away from the oppressive heat. I felt my batteries had been sufficiently recharged, and I was ready for the next chapter. I now had a travelling partner in Raul, we were headed in the same direction so decided to go together. Little did we know we would be travelling together for the next six weeks, all the way down through the length of Belize and to the paradisiacal Bay Islands off Honduras’ Caribbean coast
Posted by Chris D Cooke at 16:55