The Curse of the Gringo Trail.

The jungle – at once dark, dangerous and mysterious, vibrant, colourful and alive. It’s an environment which has always intrigued me and Chiapas, Southern Mexico is where I get my first taste. It is nothing too adventurous, more of an appetiser than an all you can eat buffet, but it is jungle all the same and an experience I will never forget (although maybe not for all the right reasons). Following a recommendation from a heavy lidded young Mexican we met on the beach in Zipolite my new travelling companion Raul and I are headed to El Panchan - an assortment of businesses set up to cater for the large number of visitors to Palenque National Park and it's world famous Mayan ruins. 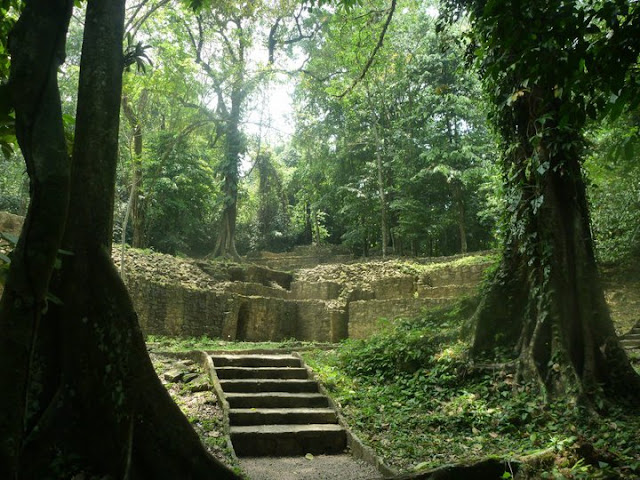 “Panchan!” the bus attendant calls, snapping me out of my window gazing daze. I elbow Raul gently in the ribs, waking him.
“This is us bro.” I say unfolding myself from the cramped corner of the van. As we draw to a halt I clamber awkwardly over the other passengers and stumble out the door. Stretching myself to full height I can almost hear my spine creak. Mexican mini buses are one place it definitely does not pay to be tall.
The attendant passes our backpacks down off the roof, swings back into the passenger seat and the van roars off leaving us blinking, bewildered on the side of the road. Well I guess this is welcome to the jungle, I take a look around. The first thing that strikes me is the noise. The high pitched ringing of a million singing insects resonates through the heavy, damp air, so shrill and loud it's as if the sound is coming from between my ears. The dark tar-sealed road, lined on either side with tangled walls of dense vegetation, disappears in a haze in both directions. Emerald green parrots swoop and squawk under a sky hung low and grey.
A lone wooden sign promising camp sites, cabins and restaurants leads us through a gap in the trees and down a dirt trail. It soon opens up to reveal a small selection of wooden buildings tucked in amongst the jungle like an ewok village. Pan pipe music floats from the speakers of an open air restaurant. Huge trees tower above like moss covered sky scrapers. Shooting up into the sky they spread their enormous branches supporting entire eco systems within their grasp. Birds dart busily through their hair, bright red squirrels scramble up their sides and electric blue butterflies flap at their feet. Leaves the size of coffee tables droop to the ground around us like shiny green horses bowing to drink, flowers spark splashes of red and yellow leaping out from the deep greens and earthy browns. After the cramped conditions of the mini bus I suddenly feel small, dwarfed by the immensity of nature, like I’ve stumbled onto the set of Honey, I shrunk the kids! Life sings from every space, it fills my lungs, my senses and my heart races with the beauty of it.

But before I let myself go Tarzan, our first mission as always is to find somewhere to sleep. Travelling with Raul has opened my eyes to a new level of frugality. He has been travelling for some time now and has learnt the importance of saving money when you can. He settles only for the cheapest option available sometimes searching for hours to save a couple of bucks. Whether it be for food, accommodation or a bus ticket - every penny counts. I know it’s something I can learn from, but sometimes it drives me crazy. Luckily on this occasion our choices are pretty limited. We find two Israeli lads to interrogate. Quivering under Raul's stern one eyed gaze, they point us in the direction of a place called Mono Blanco where we find room for my tent and a hammock available for Raul. It’s simple and cheap with a young crowd. Perfecto.

Mono Blanco, what an interesting place. Smack bang in the middle of the jungle with airy wooden cabins, hammocks strung under thatched leaf roofs, smooth cobbled stone paths and streams chuckling throughout - it's hippy heaven. A place for bare feet and bongo drums where fire pois and face piercings are the norm - so much so in fact, that over the next few days it begins to feel a bit like a freaky fashion contest. Almost as if some of the people are trying to out-hippy one another and if you’re not dressed in multi colours, sporting a crazy haircut and/or a face full of metal then to them you are considered an outsider. 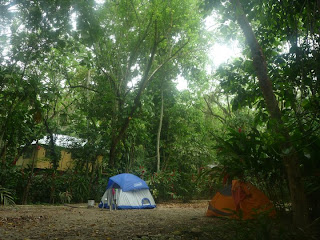 There are some people, mostly Mexicans, who love this place so much they have decided to stay and I can’t say I blame them. They survive by performing at night – fire dancing and playing music – or by selling their handicrafts, spreading them out on tie dyed sheets outside the restaurants. It’s the kind of life I admire, but unfortunately the stigma of tourists being nothing more than a source of income stretches even to here. In a place like this, free from the confines of modern society, one might expect a more open minded and welcoming environment but I get the impression I have been immediately put into a box, categorised and dismissed as just another guide book gringo. Ironically it seems that while coming here to live free from society's prejudices, they have created their own.

An idle chat about jade with a young artesanista after he notices the greenstone hanging around my neck soon turns into a full on sales pitch. When he realizes I’m not going to buy anything from him the energy changes and he packs up his wares grumpily, muttering something under his breath which I don’t understand. Déjà vu. I am beginning to tire of this kind of encounter. I know there is more than just money which can be exchanged between me and him, but how do I get past this barrier? It kind of takes the shine off being in such a beautiful place.


Maybe it’s the curse of following the gringo trail, visiting places where tourism is the main source of income. I know there a lot of people who travel just to tick the boxes, the type of people who take a photo, buy a souvenir then jump back on the bus and claim that they’ve “done” it. I’ve seen them in New Zealand, people who travel through the whole country in a month, trying to see everything but in actual fact seeing nothing at all. I suppose that’s the difference between a tourist and a traveller. Sadly, with a lot of tourism there’s no real cultural exchange taking place just business transactions. It’s impersonal and the locals get used to dealing with us as potential clients rather than as friends. 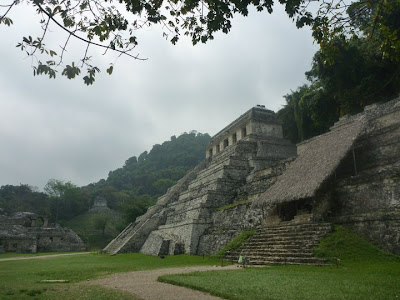 When Raul and I visit the Mayan ruins of Palenque (he insists that the entrance fee is a rip off so we sneak in through the jungle) we go early and have the place pretty much to ourselves. For two magical hours we wander the ancient city, peering up at the huge pyramids backing onto the trees. They stand as silent and still as they have for 2000 years like rocks awash in a river of raucous jungle noise. We stoop into cool, echoing caverns tracing our fingers over the strange carvings on the walls. Climbing one of the steep stair cases for a better view, Raul tells me about the high priests who used to sacrifice unlucky villagers by chopping off their heads, rolling them down the stairs to the cheering crowds below. This sounds a little like Hollywood history to me, but it adds to the impression so I go with it. As we stand at the top of the stairs an incredible noise like a huge sliding steel door roars out from the jungle’s depths – howler monkeys, often heard but seldom seen. If you didn’t know what was making that noise it could be quite terrifying.


Looking out over the ancient city, I can imagine the Mayan people of 1000 years ago going about their daily business below. It’s almost as if I can see their ghosts. Kids chase each other through the trees laughing, old men sit on the stairs talking about the weather, women carry clothes to the river to wash. What would they say if they could see me standing here now? This strange white man in the funny clothes?
As the day wears on the crowds begin to filter in until before we know it we are surrounded. Pretty soon it gets to the point where it is impossible to take a photo without a random head or hand invading the frame. With the pyramids now crawling with people and human voices drowning out the jungle noises the spell breaks and the ghosts of the Mayans vanish. It is time for us to go too, not only from the ruins but time to travel onwards to our next destination.
From here I had originally planned to cross into Guatemala like most people do, but Raul has managed to talk me into checking out Belize - the only English speaking country in Central America. Without the language barrier it will be easier to have genuine exchanges with the locals and by going there we will be escaping the main flow of tourist traffic, a prospect I am beginning to find more and more appealing.
So tomorrow we catch a bus to Chetumal the border to Belize and our gateway into Central America where the next chapter of my story will start. A chapter which will take me from tiny Caribbean islands to the mist covered peaks of Honduras’ highest mountain, from coral reefs shimmering with tropical fish to bat filled caves in the highlands of Guatemala. All of these wonderful places to explore, but what I really hope for is a connection with the people, a deeper connection than what I’ve found so far. I hope it’s waiting for me in Belize.
Posted by Chris D Cooke at 03:39